As Floridians cleared supermarkets of bottled water and emptied gas pumps, people in the northeastern Caribbean were making last minute-preparations before powerful Hurricane Irma hit their islands. Late Tuesday, the massive Category 5 storm was almost upon islands like Antigua and Barbuda with near-record 185 mph sustained winds.
The US National Hurricane Center said the extremely dangerous core of Irma would hit the northern Leeward Islands — which includes Antigua and Barbuda, St. Kitts and Nevis, and Anguilla — Tuesday night or Wednesday morning.
It’s too early to tell whether the storm will make landfall on the US mainland, but forecasts show it could turn toward Florida over the weekend.
Forecasters’ most immediate concerns are for the people of the northeastern Caribbean, the hurricane center’s Michael Brennan said. 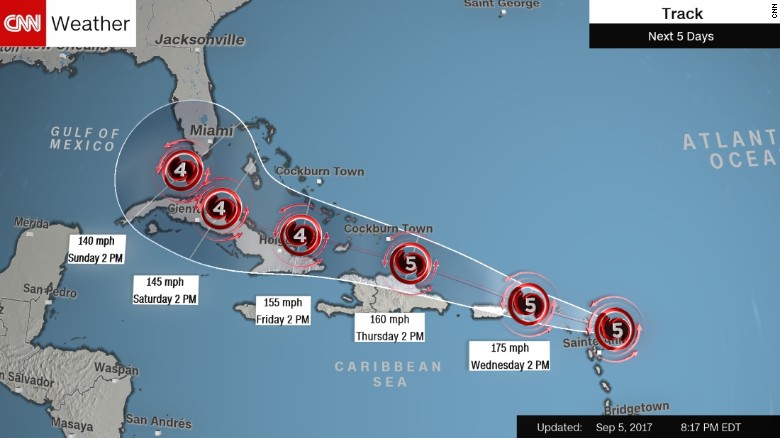 “Anguilla, all the way toward (Antigua and) Barbuda, all the way up even toward the British Virgin Islands (are) in grave danger of an eye wall hit at (at least) 150 mph — that devastates the island, no matter what island it is,” CNN meteorologist Chad Myers said Tuesday. Those islands are under hurricane warnings, as are Puerto Rico, the US and British Virgin Islands, Montserrat, St. Kitts and Nevis, Saba, St. Eustatius, St. Martin/St. Maarten, and St. Barts. One Twitter user in St. Barts posted a photo of rain coming down and winds beginning to sway the leaves of the palm trees Tuesday evening.
Irma’s forecast track currently has it near or over Antigua and Barbuda, St. Kitts and Nevis, and Anguilla by early Wednesday, and the British and US Virgin Islands and Puerto Rico on Wednesday afternoon. The Dominican Republic issued a hurricane warning Tuesday evening that included coastal cities from Cabo Engaño to the northern border with Haiti. Preparations to protect life and property in those areas “should be rushed to completion,” the hurricane center said in an 8 p.m. ET advisory. These homes on Nikki Beach in St. Barts are deserted Tuesday ahead of Hurricane Irma. “We could see storm surges of 7 to 11 feet — that’s certainly life-threatening — and very, very heavy flooding rainfall” in the far northeastern Caribbean islands as well as winds that could cause catastrophic damage near the eye wall, Brennan said.
Hurricane warnings are issued to areas that are expected to experience hurricane-force winds (at least 74 mph). On Antigua, home to roughly 80,000 people, fishermen used machines to lift their boats onto docks and other residents flocked to stores to stock up on food and other supplies ahead of the storm, video broadcast by ABS TV Antigua and distributed by Reuters shows. The US Virgin Islands, with about 100,000 people, declared a state of emergency Tuesday and ordered the National Guard into active service.
John Klein, owner of White Bay Villas & Seaside Cottages on Jost Van Dyke island in the British Virgin Islands, told CNN they were rebooking the guests.
“We have backups for (our utilities), but in a storm of this magnitude it’s not best for the guests to be there because they may get stuck,” he said.
Computer models show the system possibly near the Dominican Republic, Haiti and the Turks and Caicos Islands on Thursday and Friday, and Cuba on Friday and Saturday — and potentially turning north toward Florida by the weekend.