Sony launched its PlayStation brand back in 1994, and since then, the company has released four major consoles, all of which have received refreshed designs. The PlayStation division now represents 78 percent of Sony’s profits, and with the company releasing its Pro system in November, we thought we’d take a stroll down memory lane to look back at all of the PlayStation consoles. 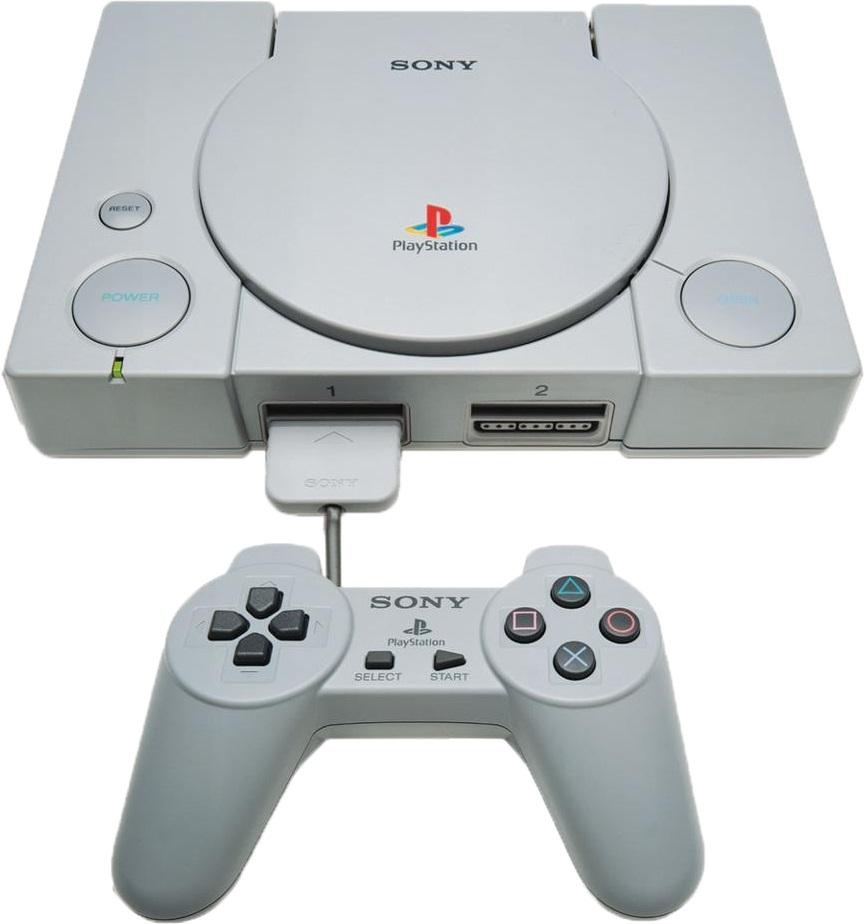 The original PlayStation launched in Japan on December 3, 1994. It went on to become the first video game console to ship more than 100 million units. It’s considered to be a part of the fifth generation of game consoles and competed against the Sega Saturn and Nintendo 64 in the mid-’90s. The catalyst for the console actually spawned from a failed partnership with Nintendo, when Sony was in talks with building an add-on for the Super Nintendo. The PlayStation would go on to feature a dual-speed CD-ROM drive, a one-core CPU that had 2MB of RAM along with 1MB of video RAM with graphics that could deliver up to 360,000 polygons per second.

The original PlayStation played a pivotal role in transitioning the industry away from 2D graphics to real-time 3D rendering. Its use of the compact disc format also allowed it to push high-fidelity full-motion video, something the competing N64 struggled to do with its space-limited cartridge. Speaking of storage, the PlayStation didn’t feature an internal hard drive. Instead, game saves required the use of memory cards, which were a measly 128KB in size. It’s also worth mentioning that the PlayStation originally didn’t ship with a DualShock controller. Instead, its basic PlayStation controller lacked thumbsticks and force-feedback technology. Sony would later release its first DualShock controller in 1997, which would add these features.

Competed against: Sega Saturn and Nintendo 64

Starting its tradition of releasing smaller versions of its consoles, Sony released the PSOne on July 7, 2000. In addition to being smaller, it featured a redesigned chassis that was much rounder. It also received an updated graphical user interface. 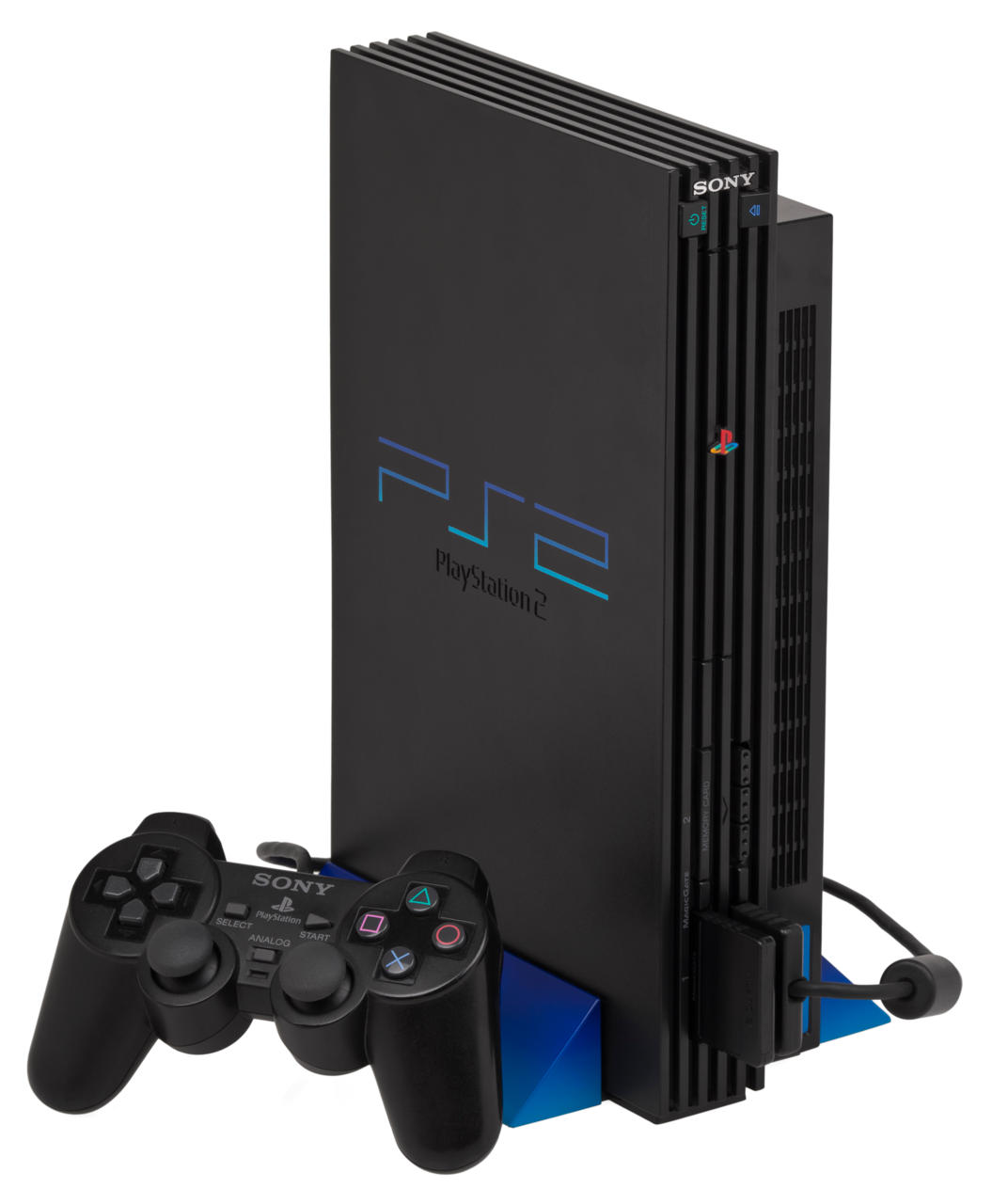 First released in Japan on March 4, 2000, the PlayStation 2 has gone on to become the best-selling console to date, selling more than 155 million units over a 12-year span. The PS2 is a part of the sixth generation of consoles and competed with the Sega Dreamcast, Nintendo’s GameCube, and Microsoft’s Xbox. Ultimately, the PS2’s leg up on the competition was its sheer library size–the console produced well over 2,000 games. The PS2 launched with its Emotion Engine CPU, which was a one-core processor clocked at 294.9MHz. It featured 32MB of system RAM and 4MB of video RAM. The console was backward compatible with most PS1 games, which was a rare feature at the time. It was also the first console to support DVDs–which, in addition to enabling games with larger assets, allowed the PS2 to play DVD movies. It was also the first console to support USB ports, which the PlayStation EyeToy camera would be able to take advantage of upon its 2003 release.

While the original console allowed users to install an optional 40GB hard drive, it still used memory cards. Unlike the PS1, however, which used 128KB cards, storage here was bumped up to 8MBs. The PS2 also introduced the DualShock 2. While still wired, this controller featured a new black finish and tighter sticks. 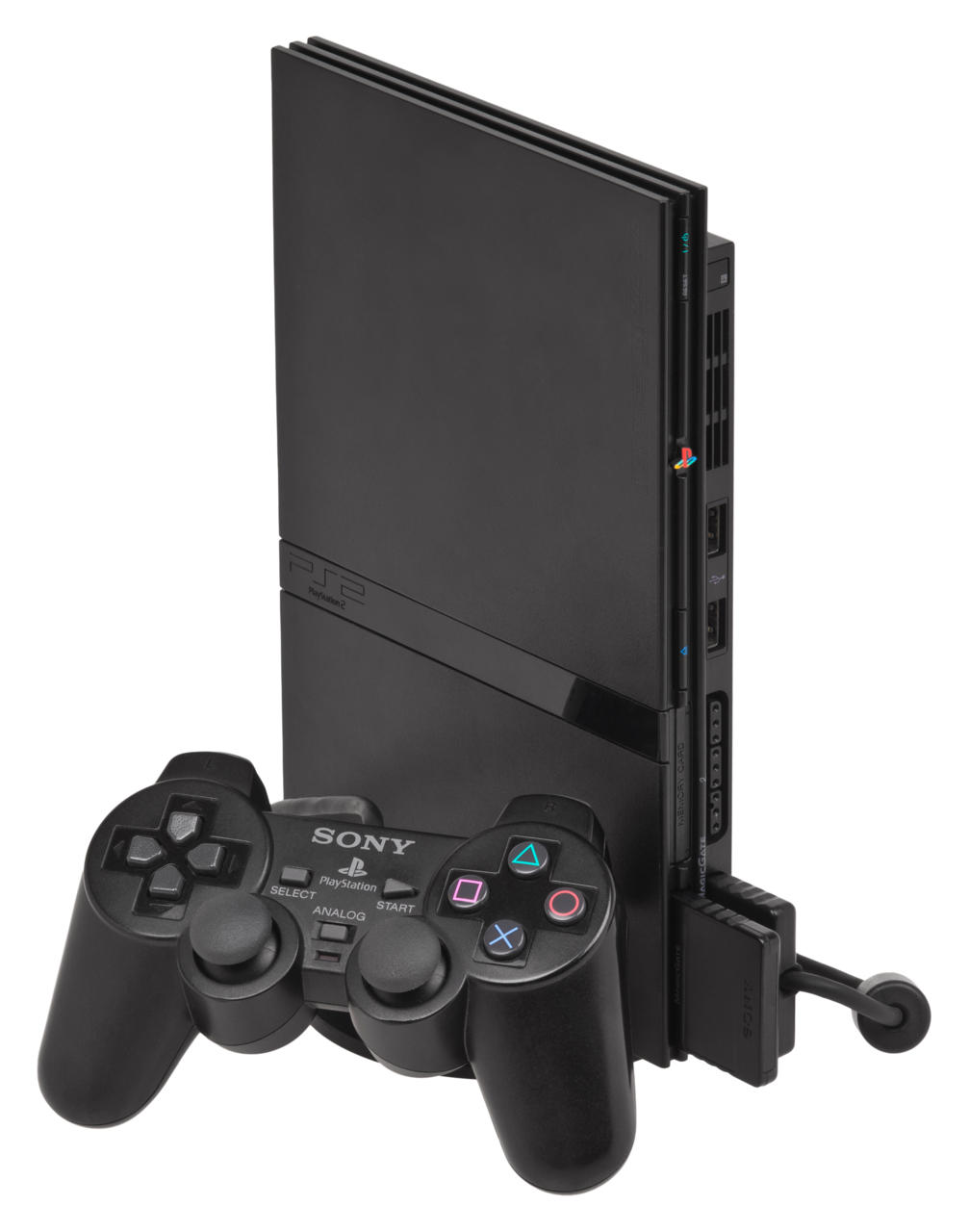 In September 2004, Sony continued its strategy of releasing smaller versions of its consoles when it unveiled the PlayStation 2 slimline. Not only was the system smaller, but it was also quieter and included a built-in Ethernet port. 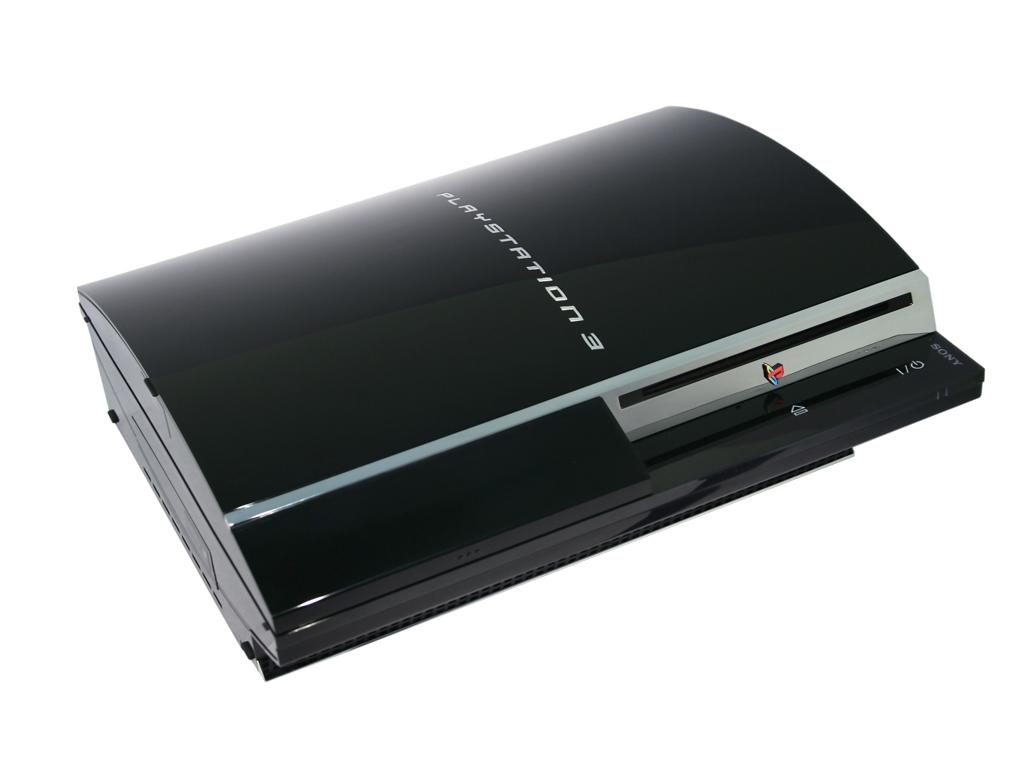 First released on November 11, 2006 in Japan (followed a week later by its North American debut), the PlayStation 3 sold more than 80 million units worldwide and competed against Microsoft’s Xbox 360 and Nintendo Wii. Launching at $599.99, it was the most expensive system of the bunch, but it was the first console to have a Blu-ray drive and was priced cheaper that most standalone Blu-ray players when it launched. At the heart of the PS3 was its proprietary Cell processor. Sony designed the chip in partnership with Toshiba and IBM. However, the CPU became controversial among developers due to how difficult it was to program. The Cell featured seven cores and was clocked at 3.2GHz. The PS3’s graphics used Nvidia’s RSX Reality Synthesizer GPU, which featured 256MB of VRAM and clocked in at 550MHz. The PS3 was also the first PlayStation system to support HDMI and 1080p output.

Initial versions of the PS3 were backward compatible with PS2 games, but that was because Sony physically incorporated a PS2 processor inside the chassis. To cut costs, Sony later removed this feature shortly after launch. The PlayStation 3 also introduced Wi-Fi connectivity and came with a 20GB internal hard drive. It allowed users to install their own HDD as well.

Additionally, the console also saw the birth of the PlayStation Network, which allowed players to download games and use video-viewing apps like Netflix and YouTube. In addition, the PS3 introduced the company’s PlayStation Plus subscription service, which provided gamers with early access to betas and game discounts. The PS3 also introduced the DualShock 3, which was the first wireless version of Sony’s long-running controller. On top of that, the DS3 also featured motion-sensing technology. Piggybacking off the success of the Nintendo Wii, Sony would release its own PlayStation Move motion controller for the PS3 in 2010. 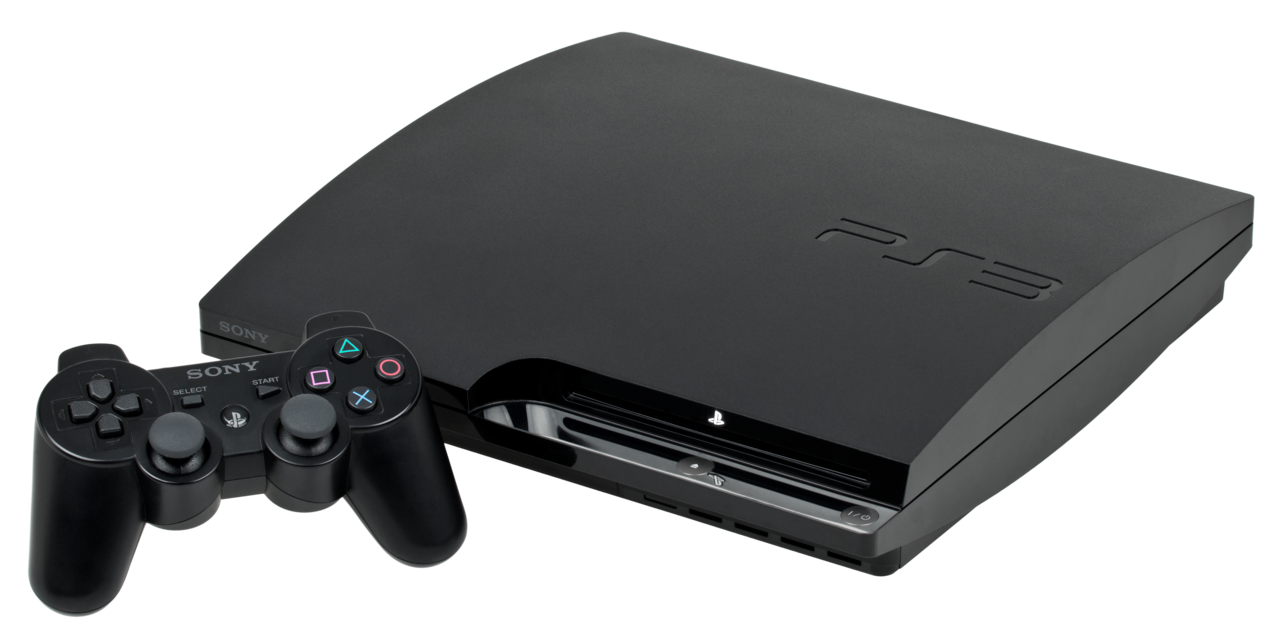 Sony released the PS3 slim in September 2009. Not only is was it about a third smaller and lighter, but due to the Cell moving to a new 45nm manufacturing process, it also consumed less power and ran cooler and quieter than the original model. The Slim removed the power switch on the back of the console. The console also featured a new PS3 logo, with Sony moving away from the original model’s font (also famously featured in Tobey Maguire’s Spider-Man films). 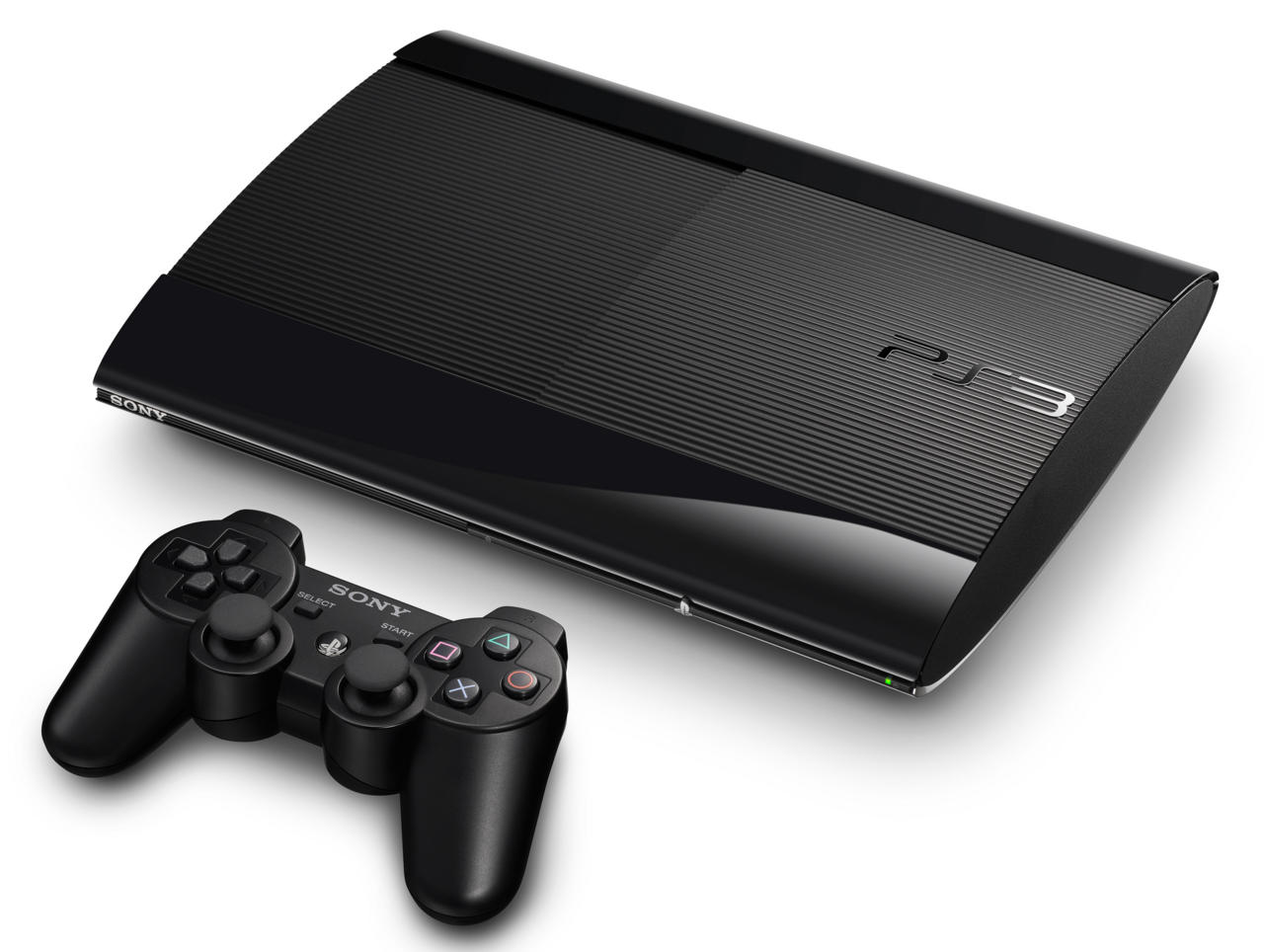 The PlayStation 3 super slim, released in September 2012, marked the first time Sony made a second design revision to one of its mainline consoles. Here, Sony removed the front slot-loading disc tray. In its place, the chassis was redesigned to incorporate a sliding lid that covered the optical drive, which had to be accessed from the top of the console. Not only was the console slimmer than the previous model, but at 4.3 pounds, it was also three pounds lighter.

Sony released the PlayStation 4 in North America on November 15, 2013, and it sold one million units within its first day, making it the fastest-selling console in a 24-hour period to date. The PS4 marked the first time Sony would release a console with a CPU based on the x86 instruction set, which is the same processor architecture that gaming PCs use. Specifically, it uses an 8-core AMD x86-64 Jaguar CPU clocked at 1.6GHz along with 8GB of GDDR5 memory, which it shares with its integrated AMD Radeon GPU.

The PS4 also introduced the ability to upload and share gameplay clips. A Share button was added to the DualShock 4 controller, which also received an ergonomic overhaul and added headset and mic ports. The PS4 is also paving the way for PlayStation VR support later this year.

Competed Against: Nintendo Wii U, Microsoft Xbox One 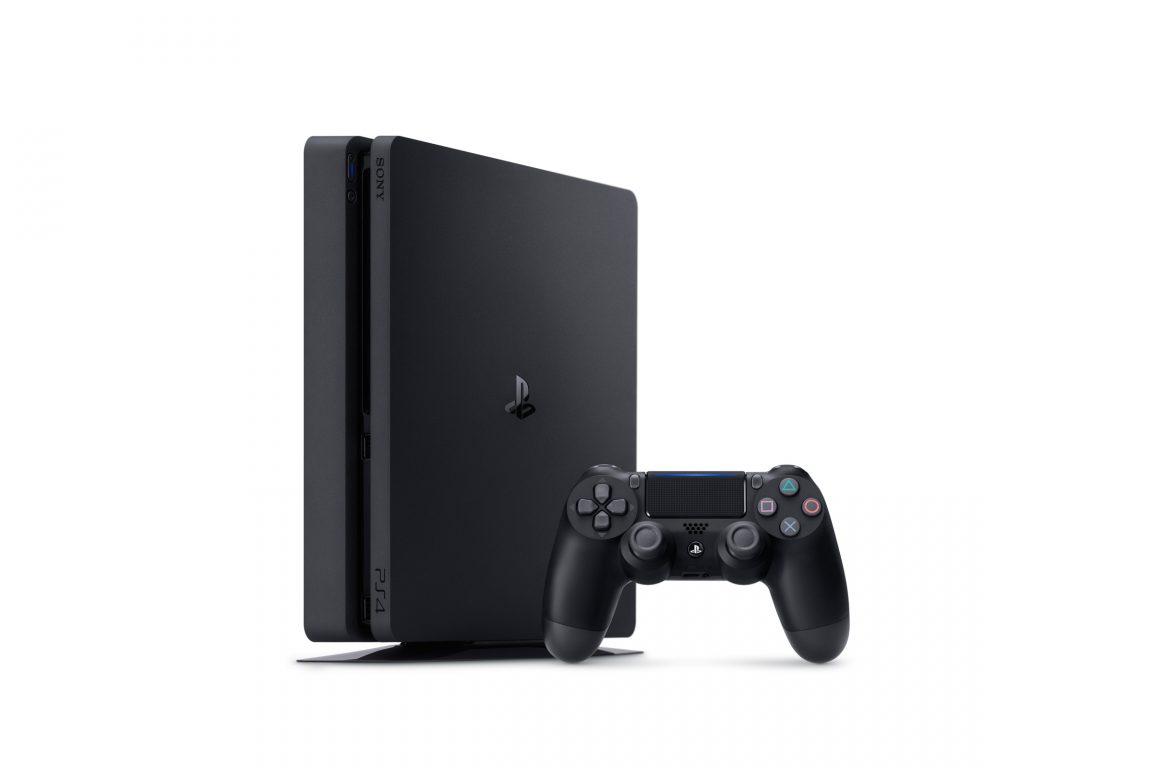 The PS4 slim continues Sony’s tradition of releasing smaller, lighter variants–and this console does away with the PS4’s sharp edges in favor of rounded corners. Some upgrades under the hood include the addition of 5GHz Wi-Fi, Bluetooth 4.0, and USB 3.1 support. The system is also more power efficient and runs a bit cooler and quieter than the original model. The one big drawback? It removes the PS4’s S/PDIF optical port.

Unlike traditional design refreshes, the PS4 Pro offers a notable bump in specs. The console will be based on AMD’s Polaris graphics and feature 4.2 teraflops of GPU performance, more than double the original PS4’s 1.84. In addition, Sony purports that the Pro will support 4K gaming capabilities. The console will also be completely backward compatible with the PS4, and Sony says that developers can use the extra processing power to bolster the graphical fidelity of existing titles at 1080p.

Since it’ll be roughly three years removed from the original PS4’s launch, the Pro signals a move away from the traditional five-to-seven-year console life cycle we’ve been accustomed to in favour of a faster console cadence.