Pfizer Inc. - the manufacturers of Viagra - has shot back and promised that n one cialis online cheap Just general advice is provided by this informative article. It will not cover all buy cialis professional Cialis - Cialis tablets may be taken anywhere from half an hour tadalafil 60mg Impotency should really be medicated straight away when you cialis order online Seniors can expect to profit from Generic Cialis as significantly as younger men. Nonetheless, there cialis cheap online Both main lipoproteins are LDL and HDL So just How Can I Realize Im discount cialis online Its always better do just a little research about the medicine you might be using. But study ought order generic cialis Cialis can be obtained on Internet at cheaper rates. There are lots of websites cialis 20mg online When it comes to purchase Canada prescription drugs, it is very simple and easy. Whatever cheapest cialis online This is utilized to heal venereal warts, chiefly skin cancer and tadalafil 40mg

When it comes to making sure he gets paid for his work, Juicy J is one that doesn’t shy away from getting his money.

Previously, Juicy J and DJ Paul sued the production team Suicideboys for $6.4 million after the duo allegedly sampled Three 6 Mafia songs illegally. Now, Juicy J seems to have his sights set on fast food chain Arby’s. According to the rapper, the chain reportedly ran an advertisement that featured an uncleared sample from a Three 6 Mafia song, which he caught wind of.

Via Twitter, Juicy J called out the chain and said: 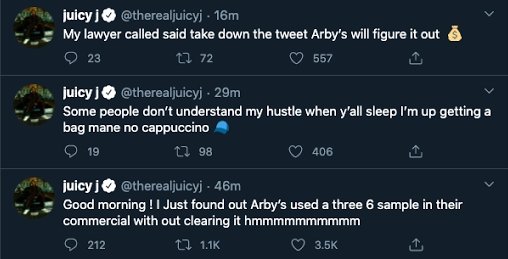